In preparation for the upcoming school year, we are proud to introduce HSPVA’s new logo!

Why the new look?

With the long-awaited new campus set to open in January 2019, the move presented the perfect opportunity for a refresh! HSPVA’s brand has been going strong for almost half a century. We all know that logo use has evolved tremendously since 1971. From websites, social media, and videos to presentations, playbills, and signage, the school needs a look that works seamlessly across all platforms while representing HSPVA’s past, present, and future.

The scene is early 2016. With funding in place through HSPVA Friends, HSPVA’s Principal, Dr. Allen, was able to contract a team of designers from the Gensler Brand Design office. Gensler was the obvious choice. Their architects were already working hard to design the new campus! They had spent hundreds of hours with the students and teachers in Montrose. We knew Gensler understood the HSPVA culture.

Next, a committee of faculty and alumni assembled! Together, they represented every decade of HSPVA’s history, from the 1970s to the present.

The committee’s goal was to establish a single, coordinated brand identity. It was a tall order: a new logo had to represent who HSPVA is today and going forward. This was an opportunity to unify all aspects of the school and to refine perceptions, both internally and externally. By establishing an aesthetic standard that could be upheld and built upon in the future, HSPVA would continue to grow as a leader in arts education.

Together, the team worked to define what HSPVA meant to each of them. In the end, they clarified the school’s mission statement:

By cultivating both artistic and academic excellence in a diverse environment, HSPVA builds the confidence and enthusiasm required for an accomplished creative future.

Over multiple meetings in the HSPVA Art Gallery, the Gensler design team asked the committee big questions: Why are you making this change? What are key challenges you face? How would you measure success?

Immediately, common answers surfaced. Some were practical, like the desire for legibility and scalability. But many were more complex. For example, the logo would have to communicate that HSPVA fosters a shared creativity between distinct art areas and unique students. As one committee member put it, “Let’s take what’s delicious, and amp it up!”

The committee also spent time discussing how HSPVA’s past interacts with its present – and how both would carry into the future. Who are we? What do we do? And, how do we differentiate ourselves? Several members used the metaphor of a tree: deep roots from the Original Campus, a strong core established over many years at the Montrose Campus, and the open reaching canopy of the Downtown Campus.

By the end, the committee had created a collage of words to describe HSPVA: classic, bold, artistic, pre-professional, creative, familial, innovative, playful, competitive, quirky, original, diverse, and needed! Our purpose is to deliver the highest level of arts education. We expose possibility, stimulate exploration, and cultivate artistry.

The designers took everything they learned and presented several logo options. The vote was unanimous: we had our logo! As the branding sessions wrapped up, HSPVA received an enormous gift of $7.5 million from a longtime donor, the Kinder Foundation. This gift ensured that the performance venues, art area classrooms, and common areas at the new campus could be completed! In recognition of the school’s philanthropic partner and according to HISD’s recognition policy, the name of the school evolved to the Kinder High School for the Performing and Visual Arts. The logo the committee had chosen was ready for the big move and the 2018-2019 school year!

An Identifier for Today and Tomorrow 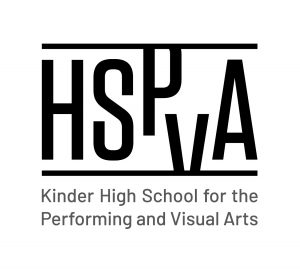 We sure hope you like the new look as much as we do!

Special thanks to the committee members: