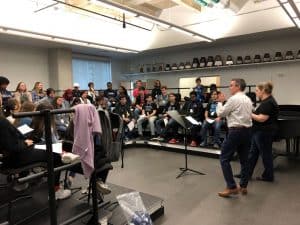 UPDATE: On Tuesday, January 8, HISD’s DACA account was opened and HSPVA Friends transferred the approved installment of $1.5 million noted below. HISD’s project management team is finalizing the next installment request, which is expected to be formally submitted by January 31. That request will cover expenses related to theatrical lighting, a school-wide audio/visual system, and other arts-related equipment, completing the construction phase of the grant agreement.

In a few short days, classes will begin at the new downtown campus for HISD’s Kinder High School for the Performing and Visual Arts. It is a dream come true for faculty, students, and alumni.

As many of you know, the campus was part of the Houston Independent School District’s voter-approved 2012 Bond Program. When budget shortages threatened to cut the project’s scope, philanthropic support was needed to fill the gap between the bond funding and the specific needs of 21st-century arts education. In 2016, HISD requested help from HSPVA Friends, and HSPVA Friends launched a $10-million capital campaign to complete the campus and to ensure that it will operate to its full potential. The Kinder Foundation, a long-time supporter of HSPVA, stepped in with a lead gift of $7.5 million.

The Kinder Foundation gift was fully funded to HSPVA Friends by December 2017. Per the 2016 gift agreement signed by HISD, HSPVA Friends, and the Foundation, the grant remains in a designated HSPVA Friends bank account under a Deposit Account Control Agreement (DACA) until HISD provides information for installments to be transferred into HISD’s DACA account.

As of January 2, HSPVA Friends understands that HISD is very close to opening its DACA account so that HSPVA Friends can begin transferring the requested funds.

HISD has submitted a $1.5-million installment request, which was approved by HSPVA Friends on March 7, 2017. It covered expenses related to the orchestra pit lift, music practice rooms, Studio Theatre, and other items listed in the grant agreement. Since that request was approved, HSPVA Friends and HISD have been in regular communication, with both organizations understanding that the approved installment will be transferred to HISD as soon as its DACA account is created to receive the funds. 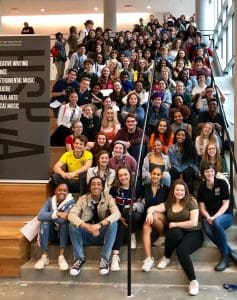 Theatre students pose for Kinder HSPVA Musical Theatre Director Charles Swan to snap a photo in the Commons of their new campus.

Meanwhile, the HISD bond office has kept HSPVA Friends apprised of construction progress, and we are confident that the grant money has been well stewarded. Currently, HSPVA Friends is working with the construction team as they finalize the next installment request. That request will cover expenses related to theatrical lighting, a school-wide audio/visual system, and other items listed in the grant agreement, as well as additional needs that arose during the construction process such as safety enhancements and equipment in the sculpture lab. The second request is expected to total approximately $3.9 million.

HSPVA Friends is ready and eager to transfer the total amount requested as soon as HISD’s DACA account is opened. We are working with HISD to ensure that all transfers for the construction phase will be completed in January 2019.

Per the gift agreement and with construction completed, the remainder of the Kinder Foundation grant will be used for future Kinder HSPVA capital expenses – such as the replacement of aging equipment – until 2029.

“Working collaboratively with HISD, we are forging a new path for philanthropic partnerships for the benefit of a public school. For students, this means access to the highest quality of public arts instruction in the country,” said HSPVA Friends Executive Director Alene Coggin. “As director of this organization, and also as an alumna, I am excited and proud to be joining HISD faculty, students, and so many others in celebrating the opening of Kinder HSPVA’s new campus. Their vision has become reality.”

The public is invited to a community open house in February to explore this state-of-the-art facility! More details to follow.