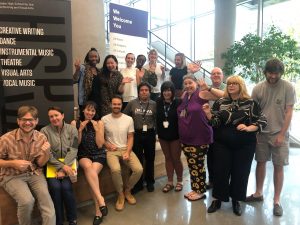 Proud alumni who are also Kinder HSPVA faculty and staff for the 2019-2020 school year!

We are very excited to welcome Ellen Phillips (Visual Art ’11) and Yanira Soria (Instrumental ’06) as full-time Kinder HSPVA faculty! Read about all of the new 2019-2020 faculty members here.

Elena Negron (Creative Writing ’18) reflects on important lessons learned in high school in a profile for her college paper, the Trinitonian.

Check out this interview with vocalist Jordan Coffing (Vocal ‘10).

Logan Keslar (Dance ’05) discusses growing up in musical theatre with Outsmart Magazine as he gears up to reprise his role as Bobby in TUTS’ A Chorus Line, Sept 10-22.

Get your local sports fix through coverage by Marcus Gutierrez of the Houston Chronicle.

HSPVA alums had an impressive showing at the 2019 Houston Theater Awards, including current Kinder HSPVA faculty Matt Hune (Theatre ’03), who was named Best Artistic Director for Rec Room Arts. Tamarie Cooper (Theatre ’87), Jason Nodler (Theatre ’87), and Shayna Schlosberg (Theatre ’06) were also recognized in the many awards given to Catastrophic Theatre, including Best Revival.

Find out what Helen Sung (Instrumental ’89) has to say about playing piano at the Miller Theatre this summer, in this profile by Olivia Flores Alvarez (Theatre ’76).

Lovie Olivia was profiled in Outsmart Magazine for her recent exhibitions and one-night performance event at the Lawndale Arts Center in Montrose.

Got alumni news of your own? We’d love to hear it! Click here to share your news with HSPVA Friends, and you may see it in an upcoming newsletter!